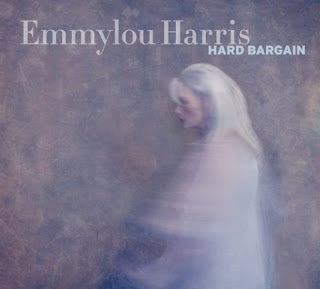 On her superb new album Hard Bargain, Emmylou Harris continues to blend elements of rock, country, folk and gospel with inimitable elegance and style - as well as a spirit of experimentation and adventure that leaves some younger talents looking a little bit staid. (Yes, step forward Alison Krauss and Union Station.) The album, which is Harris’s 22nd solo studio release, is a beauty, its freshness possibly attributable to the fact that it teams Harris with a new producer, Jay Joyce (helmer of Patty Griffin’s Flaming Red [1998], on which Harris cameoed), and finds the artist taking a somewhat atypical approach to recording.

Harris can generally be relied upon to enlist a number of guest musicians and duet partners for a project; this is, after all, the woman who got Bruce Springsteen to chip in on just a couple of lines on “Tragedy” on her 2000 album Red Dirt Girl. Hard Bargain, though, was recorded in Nashville in one month with just two other musicians - producer Joyce, and Giles Reeves - with Harris taking care of all vocals and harmonies. But the record is far from sparse or stripped-down as you might expect from such a set-up. Rather, Joyce and Reeves operate an arsenal of instruments between them, including pianos, Omnichord, marimbula, vibraphone, djembe, organ, synths, shaker and a whole lotta guitars. The resulting sound contrasts sharply with the more traditional, back-to-basics aesthetic of Harris’s last album, All I Intended to Be (2008), and instead edges at times towards the rockier, ambient textures of Wrecking Ball (1995) and Red Dirt Girl. If the album doesn’t, ultimately, quite scale the heights of those two masterpieces, it’s still a deeply rewarding and affecting piece of work, and one that finds Harris singing as captivatingly as ever.

Despite her noted forays into original composition in recent years, Harris still remains more celebrated as a song interpreter than a song-writer. All I Intended to Be was mostly covers but Hard Bargain marks a sustained return to original composition for her, comprising eleven new songs and just two cover versions. For the most part, the new songs take a more direct and straightforward lyrical approach than many of Harris’s previous compositions, which have sometimes tended to cloak their revelations in figurative language.

The bracing opening song, “The Road,” is a case in point. It’s a track that has already attracted considerable attention, as it’s another of Harris’s songs about Gram Parsons, and a very moving one at that. If “Boulder to Birmingham” was the raw, notes-from-the-front reaction to Parsons’s passing and The Ballad of Sally Rose (1985) a complex fictionalisation of their collaboration in concept album form, then “The Road” is a mature, reflective meditation on Parsons's legacy, as Harris looks back on the partnership that changed the direction of her artistic life, the song taking the form of a direct address to the deceased. Musically, the song is grounded by sturdy, thwacked drums and assertive electric guitar work that underpins even the soaring ethereal choruses, while Harris’s vocal deftly transforms lyrics that read like clichés (“People come and people go/And nothing ever lasts”) into statements of emotional profundity, culminating in a declaration that grabs the heart in its simplicity and directness: “On this road I’m glad I came to know you, my old friend.”

The road, of course, is one of the most iconic of country music symbols, and it’s the focus of the next song as well, the hobo’s refrain “Home Sweet Home” on which Harris sings from the point-of-view of one of “God’s children…/out there looking for a home.” Though the subject matter might suggest otherwise, the ringing instrumentation and an infectious rhythm mean that the track isn’t depressing. That goes for most of the songs here which, while dealing with habitual Harris subject matter - loss, loneliness, grief, regret - don’t wallow for too long in despair, instead finding redemption in unexpected places, as well as through the liveliness and energy of the musicianship. The punchy “New Orleans,” for example, is a stirring survivor’s anthem, infused with both guitar grit and gospel spirit. And the lighter moments are nicely achieved, from the languid, Elite Hotel-worthy honky tonk of “Six White Cadillacs” to the clumpy percussion and twangy guitar of “Big Black Dog,” a heartfelt yet goofy ode to canine companionship that may well find its way into RSPCA ads very soon.

There are gentler moments too. “The Ship On His Arm,” a tale of two lovers separated by war, flirts with schmaltz but Harris’s shimmering vocal gives the piece emotional weight. “Darlin’ Kate,” meanwhile, is as touching a tribute to Harris’s great friend and collaborator Kate McGarrigle as you would imagine. Again, it’s lyrically straightforward but what’s remarkable is the way that the arrangement and Harris’s vocal delivery combine to conjure Kate’s spirit in the song, so that a track about loss and absence makes its subject palpably present. Two songs tackle the issue of “third age” loneliness head-on, firstly the tremulous “Lonely Girl” and then the lyrically more interesting and ambitious “Nobody,” which traces a trajectory from childhood hope to adult disillusionment, concluding with a moving redemptive flourish that brilliantly brings the song full circle.

The weakest moment, for me, is “My Name Is Emmet Till,” a song about the African-American teenager who was murdered in Mississippi in 1955 for flirting with a white woman and became a martyr for the Civil Rights movement, as well the subject of one of Bob Dylan’s most didactic songs. Unlike Dylan, Harris sings the song from Till’s perspective, and while her delivery is discreet and poignant the track doesn’t quite work, feeling, overall, like too self-conscious an effort to construct a first-person narrative in the Nebraska-era Springsteen or Steve Earle mould. But the two covers that Harris has included are real album highlights, and ones that blend seamlessly with the original material. Her faithful take on Ron Sexsmith’s “Hard Bargain” twangs and twinkles captivatingly, with Harris’s voice transitioning from breathy highs to grainy lows, while the Joyce composition “Cross Yourself,” all warm, chiming guitars and chugging percussion, closes the album on a truly lovely note of optimism and emotional openness. “There’s no day like today,” Harris affirms. “Everything that’s meant to be, come to me.”

“It’s important to push the envelope of what we call country music without ever losing sight of the most important element, the soul,” Harris has been quoted as saying. Harris has been pushing that particular envelope for almost forty years now and Hard Bargain demonstrates again her uncanny ability to draw on the past and come up with something vital and fresh. This is another masterful release from her, a record of encompassing warmth and emotional insight, grit and timeless grace.