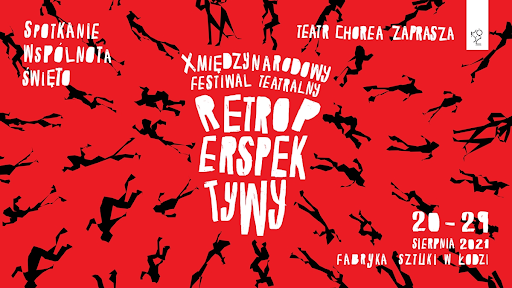 Now in its 10th edition, the international theatre festival Retroperspektywy, hosted and programmed by Teatr CHOREA at their HQ of Art_Inkubator, remains a vibrant highlight of summertime in Łódź.  The festival features all kinds of performances, workshops, talks, discussions and presentations across its ten August days, and the title of this year's just-concluded edition - Spotkanie / Wspólnota / Święto (Meeting / Community / Celebration) - felt particularly significant.

Not only are those concepts central to the Festival's ethos (and to that of CHOREA as a company more broadly), they also seem freshly potent following the previous, pandemic-stricken 18 months. (Against all odds, the festival was able to take place, between Polish lockdowns, last summer. I wrote about it here.) As Artistic Director Tomasz Rodowicz notes of this year's edition: "We invited creators who, through their artistry, refer to the oldest function of performative arts - celebration - in the meaning of something extraordinary and pleasing... It is a celebration bringing new reality to viewers - happiness and hope rather than chaos and destruction."

That's not to say that this year's festival was all about fun. On the contrary, the rich range of work on display encompassed a variety of emotional registers. Wojciech Faruga's JA JESTEM PAMIĘCIĄ (I AM MEMORY), for instance, offered a moving evocation of the culture and history of the Lemkos: the Carpathian highlanders who lived in the Beskid Niski mountain area for four centuries, until a 1947 decree was issued to resettle them - along with Hutsuls and other ethnic groups.

Reminiscent of the sections dealing with Hutsul traditions that formed a thread throughout Mariusz Grzegorzek's great 2018/2019 Łódź Film School Diploma Show Pomysłowe Mebelki z Gąbki (Fever),  I AM MEMORY evokes the culture and history of the Lemkos in a way that is both expressionistic and attuned to lived, daily detail. At once sensitive and bold, the production invokes Lemkos legends such as that of the "sleeping army" through sometimes startling theatrical language. Faruga and Wojciech Nowak's extraordinary lighting captures the cast (comprised of theatre professionals and local community members) in a range of attitudes and positions, and at times gives the piece the haunting quality of a requiem.

Spirits were also conjured in Ghost Dance, a work by another invited company with a strong community emphasis - the Goleniów-based Teatr Brama. Director Daniel Jacewicz and an eight-strong cast - Jenny Crissey, Joanna Kalinowska, Edyta Rogowska, Aleksandra Ślusarczyk, Patryk Bednarski, Maciej Ratajczyk, Wojciech Rosiński, and Oliwier Szałagan - explore war, cultural erasure and oppression through movement, music, poems, and songs. The latter range from beautiful choral interludes to a multiple-language rendition of "I Didn't Raise My Boy to Be a Soldier" and a wonderfully barbed ditty on the subject of performative social media virtue-signalling.
Defiantly international in its conception and composition, and with drums as a symbolic centre (just as a drum functions at one point in I AM MEMORY), the performance counters the despair of much of its subject matter by finding a through-line of hope and resistance in various practices and arts. Connecting the Native American ritual which gives the piece its title to the work of the Beats and others, the show is by turns angry, ludic and lyrical.
A 60s counterculture spirit was evident, too, in the Gdańsk-based Teatr Dada von Bzdülöw's Koniec Wielkiej Wojny (The End of the Great War), a Dadaist revue that gained momentum as it progressed, especially when its indefatigable quintet - Katarzyna Chmielewska, Katarzyna Ustowska, Leszek Bzdyl, Piotr Stanek, Wojan Trocki - each took to the microphone to sing. But perhaps no show went further in combining the dark, the comic and the absurdist than the premiere of Śmierć na gruszy  (Death on a Pear Tree).
Adapted in the most radical fashion by CHOREA and director Łukasz Kos from Witold Wandurski's 1925 satire on militarism and capitalism, the result is a gleefully excessive extravaganza from its exhilarating opening relay onwards. Elina Toneva's scythe-toting Death (at one point seen roaming Piotrkowska Street via video footage) and Rodowicz's chain-smoking Jesus are among the production's most indelible creations. But all of the cast members - Joanna Chmielecka, Joanna Filarska, Paweł Głowaty, Julia Jakubowska, Michał Jóźwik, Sara Kozłowska, Małgorzata Lipczyńska, Anna Maszewska, Wiktor Moraczewski, and Ewa Otomańska - manage to make their mark in this delirious collective endeavour, while the contributions of the on-stage musicians Grzegorz Fajngold (synthesizers), Piotr Gwadera (drums, percussion), and Piotr Andrzejewski (guitar, bass, moog) add to the punkish energy of the piece.

Kos's production renders even the interval a riot, with the audience invited on stage for drinks and nibbles in celebration of Death's defeat. The second half gets even wilder, with severed limbs and buckets of blood creating a full-on phantasmogoria replete with allusions to 20th century conflicts. By far the funniest show I've seen CHOREA perform, and among their most risk-taking, this wild cackle in the face of death is an unforgettable spectacle that's as horrifying as it is hilarious.

The Festival also gave another opportunity to experience a couple of previously-premiered CHOREA ventures, including the bold dance duet Powinniśmy być…Impresja na kilka czasowników (We Should Be...Impression on a Few Verbs) which I reviewed at its opening in May. Schulz: Pętla, (Schulz: The Loop), meanwhile, was derived from the company's Schulz: Skrawki (Schulz: Scraps), which opened last year's festival.

Much expanded from that intense and distilled performance, the new production returns to several motifs from the earlier show but emphasises the power dynamics at the heart of the Bruno Schulz material, finally moving into more obviously political, absurdist terrain.

Alongside Anna Maszewska and Katarzyna Gorczyca, Lipczyńska was one of the heroines of Księżniczki (Princesses). The other heroine of this event is Julia Jakubowska, who wrote and directed this delicious mash-up of fairy-tale figures.

Uniting The Little Mermaid, Cinderella and Snow White, Jakubowska's show deconstructs female archetypes in a way that's provocative, loving and witty: one sequence, with Maszewska "performing" masculinity to the full-on competitive reactions of her two fellow cast members, made me weep with laughter. Offering a fresh take on contemporary feminist revisionings of fairy-tale tropes, this beautiful show deserves to be widely seen.

The recurrent themes of war and conflict that featured in many of this year's shows ensured that the Festival never shied away from exploring "failed" or more problematic aspects of the concept of community.
Still, the Festival boasted multiple moments of pure, unadulterated joy, many of them dissolving the boundaries between performers and audience. These included the ecstatic courtyard conga that concluded Sekundowa wspólnota (Second Community), a delightful outdoor performance featuring the Children's Theater, Youth Theater and Senior Theater Groups; and Saturday night's riotously enjoyable concert by the Czech brass ensemble HarMálek Orchestr.
The final day's offerings included Dzień Dobry Pinky Mouse!, a family show of gleeful exuberance. Written and directed by Ola Shaya and Joanna Filarska, the show is part pantomime, part concert and part cabaret, and boasts a heartwarming (and politically resonant) message. Between performances, those attending the Festival also had the opportunity to experience Finnish artist Johanna Alanko's beautiful work: a large display of painted ceramic eggs in the exhibition "Eternal Time is Born Today." 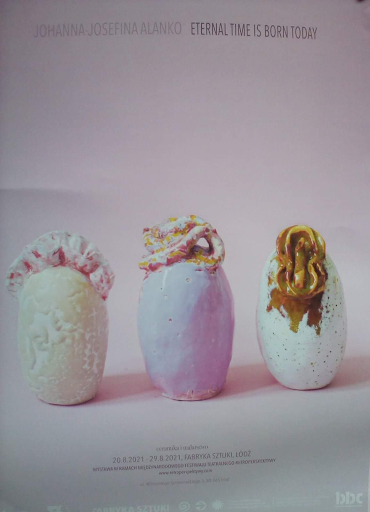 Inclusive by nature, Retroperspektywy could extend its reach yet further by surtitling performances to attract non-Polish speaking audiences. Nonetheless, the aforementioned events, and numerous others experienced over the 10 days, conspired to make this 10th edition of the Festival as pleasing as it was extraordinary.
Performance photos by: AGNIESZKA CYTACKA FOTOGRAFIA
The 10th Retroperspektywy Festival took place in Łódź between 20th-29th August. Full details of the Festival programme are here.
Posted by Alex Ramon at 8/30/2021 08:38:00 pm