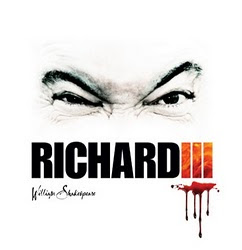 Having previously presented the Henry VI plays in a slaughterhouse (as Rose Rage) and set their superb Merchant of Venice in a prison, Ed Hall’s consistently brilliant all-male Shakespeare company Propeller return with a production of Richard III that approaches the play as a species of deranged Victorian medical drama. On a set (by Michael Pavelka) that variously evokes mental hospital, torture chamber, mortuary and morgue, a sinister masked Chorus - orderlies by way of Halloween’s Michael Myers - hum and chant, clutch clubs and haul body bags, and generally do Richard’s murderous bidding, singing merry ditties when they’re through.
It’s a strange, surprising ambience that’s created, to be sure. But, as often with Propeller, conceits that in theory sound like the height of gimmickry prove dynamic and revelatory in practice. Richard III has never been one of my favourite Shakespeare plays but as staged here - with judicious cuts and creative additions to the text by Hall and co-adapter Roger Warren - the play made more dramatic and thematic sense than ever before. I was grateful to have the chance to see the production at Guildford’s Yvonne Arnaud Theatre last week; the only disappointment was that the other show that the company are presenting this season (The Comedy of Errors) wasn’t staged at this venue too, and doesn’t open until the group hit Girona next week.
Capable of evoking both mental state and nation state, Hall’s eccentric production brilliantly catches the play’s political seriousness and its ghoulish comedy. Indeed, the line between funny and scary is deliciously, sometimes deliriously blurred here. Familiar scenes emerge new minted, from the wooing of Lady Anne through to a thrillingly staged Eve-of-Bosworth nightmare, in which Richard’s victims emerge from their body bags to curse their killer and bless Richmond. The murder scenes (and Hall even has the temerity to up the play’s body count) are staged explicitly with outrageous, Theatre of Blood-esque bravura and involve an astonishing arsenal of instruments from knives to chainsaws, drills and scythes, not to mention a spot of finger-biting. (The production sometimes suggests Shakespeare via Saw; taking our seats we were warned that the front row was a potential “splash zone”.) But part of what’s so exciting about Propeller’s approach is their willingness to draw from a diverse pool of influences; this Richard merges Latin mass, carols and rap, puppetry and music hall, Victorian Gothic and contemporary torture porn. And, in Hall’s capable hands, it all makes perfect sense. 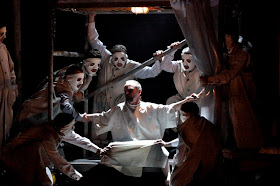 As always, the ensemble work brilliantly together as a unit, while also essaying vivid individual characterisations. Standouts include John Dougall's moving Clarence, Sam Swainsbury and Richard Frame as his murderers (this pair also prove expert puppeteers in their other roles as the Princes destined for the Tower) and Robert Hands who also does double duty, as an ailing Edward IV and a white-suited, cross-clutching Richmond. The women’s roles are inhabited with customary skill, from Jon Trenchard’s Lady Anne to Tony Bell’s marvellously imposing Queen Margaret, imperious reminder of Yorkist crimes. The statuesque Dominic Tighe commands the attention as Queen Elizabeth, a figure of perpetual mourning who nonetheless proves to be Richard’s match in cunning. (In one of the production’s many witty touches, the women’s black dresses evoke the body bags that litter the stage.) Dugald Bruce-Lockhart presents Sir Richard Ratcliffe as creepily prim, checking his watch as bodies fall, while Wayne Cater offers a truly bizarre (lineless) incarnation of the murderer Tyrrell, emerging like some devil-doll out of the depths of Richard’s disordered psyche.  And then of course there’s Richard Clothier’s mercurial Richard himself, clad in black, lower leg braced, at once the “bottled spider” of Queen Margaret’s description and a plausibly charming, seductive fellow; he suggests an ageing matinee idol at times. It’s a superb performance, witty and shrewd, and the actor hits some truly disturbing notes in the play’s final scenes.
In sum, this exhilarating, rich and daring production is another terrific achievement by Propeller. As usual, the company are embarking on an international tour (details here). Do catch them if you possibly can.
Alex Ramon at 11/28/2010 05:15:00 am