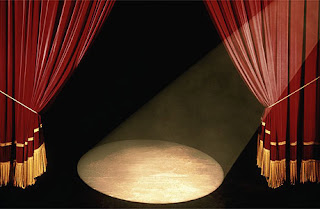 In an interview with Carole Zucker, Fiona Shaw suggests that the stage actor has “an incredible throwaway relationship to eternity.”  In the theatre, Shaw says, “you give your life’s blood to concentrating and perfecting events that pass in a second, and only live in the memories of those people who are watching them.” Harriet Walter puts a similar point a bit more positively in her book on acting Other People’s Shoes:
“The theatre feels like one of the most ephemeral of art forms when you are taking part. You can see your telly and film career on your video shelf, but all you have left of a theatre piece is the programme, some photos and perhaps some reviews. Yet for all this, of all the remarks that come my way I hear, “I will never forget that play” or, “I can still see that moment when…” far more often than I hear, “I will never forget that film/TV show.” I think that is because, at its best, live theatre involves the audience at a different level than anything recorded. When we sit in the audience we don’t just watch a fait accompli, we are part of the event. We remember the play as a personal memory. It is something that happened to us.” (Other People’s Shoes, 227)

Shaw’s and Walter’s comments got me thinking about the transience (or otherwise) of theatre as an art-form and inspired me to reflect upon some of the productions that have meant the most to me in the last decade. I’ve been going to plays fairly consistently in the last ten years, and it's certainly true that the best experiences I’ve had do live on as "personal memories" as both Walter and Shaw suggest. I don't share Walter's view that live theatre, by default,  "involves the audience at a different level than anything recorded" (check out those audience members slumbering in theatres across the land for evidence to the contrary) and certainly the form could never surpass film in my own affections. In fact, theatre played almost no part in my cultural life until I was 20. Though I'd always enjoyed the experience of reading and studying plays, this never translated into a desire to see them live. In fact, I had all kinds of predictable prejudices about theatre, which struck me as an entirely out-dated art-form: old-fashioned, elitist, a little bit embarrassing.
In the end, though, it was film that helped me to change my mind about theatre. Sam Mendes’s American Beauty, seen at the beginning of 2000, entranced me so much that it led me to investigate his work at the Donmar Warehouse where he was Artistic Director at the time. The tiny Donmar is recognised as the "bridge" into theatre for many a film actor and so it proved for this audience member. The first production I saw there, in June of the same year, was Orpheus Descending which had some reassuringly film-associated names attached to it (Helen Mirren, Nicholas Hytner, Tennesee Williams). I was pretty much enthralled by it, and got quite hooked on theatre for a while. I’m less hooked these days, but still occasionally see something that blows me away, performances at which, as Zucker puts it, "you feel that you've witnessed something fresh, important, and even heroic."   Below I've listed ten of the productions that I've enjoyed the most in the last ten years; it goes without saying that there are many, many more. 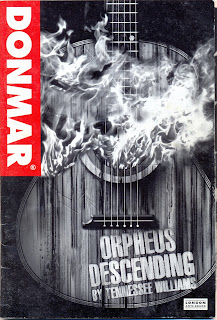 
Few would describe Orpheus Descending as one of Tennessee Williams’s greatest plays; in fact, in its film incarnation, The Fugitive Kind (1959), the piece comes off as rather ludicrous. Williams’s Orpheus is a guitar-wielding, snakeskin-jacketed drifter named Val, who encounters his middle-aged Eurydice, Lady Torrance, in a hellish Southern town where she works in her husband’s store. But in the confines of the Donmar Warehouse, in a sensitive, sometimes scary production by Nicholas Hytner, the play seemed a blazing masterpiece. “It did feel as if, done intimately, the intensity between Val and Lady would crackle quite a bit,” Hytner said. And crackle it did, with stunning performances from Helen Mirren and Stuart Townsend in the lead roles, great work from the supporting cast, and an atmosphere of oppressive rot, in which the struggle of Williams’s characters “to be not defeated” achieved tremendous poignancy. Ten years on I recall moments in this production with as much clarity as if I’d seen them yesterday. Very special. 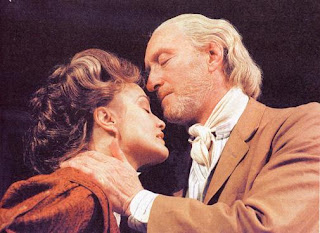 It’s been a delight to have the chance to see one of my favourite actresses, Jessica Lange, on stage twice, and in two of the American theatre’s very best roles. Despite strong work from Charles Dance, Paul Rudd and Paul Nichols, Lange’s Mary Tyrone dominated Robin Phillips's haunting  production of Long Day's Journey Into Night  from her first appearance to her closing monologue, and her unsentimental yet intensely sympathetic performance took the breath away. Lange's work here, and as Amanda in The Glass Menagerie (in 2007), adds up to as rich and memorable a pair of performances as I’ve seen in the theatre this decade. 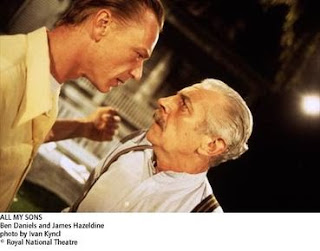 
Howard Davies’s nerve-shreddingly intense production of Arthur Miller’s 1947 drama remains my favourite production of all time. Transferred from the Cottesloe to the Lytletton, the play took on an epic grandeur without losing any of its intimacy, as Miller anatomises post-WW2 US society through a depiction of the Keller family’s losses, lies, sacrifices and crimes. Tight structure, an amazingly realistic back-porch set, superb performances from James Hazeldine, Laurie Metcalf, Ben Daniels and Madeline Potter, and an extraordinary, Ibsen-esque emotional impact. Coincidentally enough, the production is on again in the West End right now, recast, but somehow I’m not tempted to revisit it. The play is inextricably tied to this group of actors to me, and to this moment in time. But if you haven’t seen it then go, go, go, go, go. 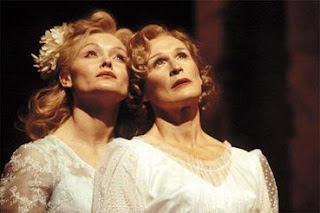 4. A Streetcar Named Desire, National Theatre, 2002
Trevor Nunn’s production wasn’t perfect, tending, at times, towards the overly grandiose. But it was still an excellent account of this most powerful and poetic of plays. Iain Glen and Essie Davis gave memorable accounts of Stanley and Stella, and if Glenn Close, as Blanche, seemed a little too strident initially, the performance deepened from “Don’t hang back with the brutes” to become extremely involving and distressing. I will never forget the final half hour of this production. At least a month after seeing it I woke up moved and shaken by its final moments. 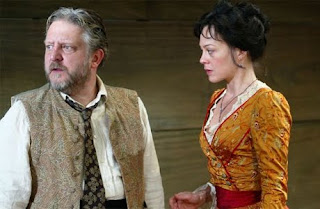 
Enough of those pesky Americans! Sam Mendes’s Donmar swansongs proved predictably stunning, a bona fide cultural Event. The decision to use the same crew and cast across both productions enabled a wealth of unexpected similarities to emerge from the plays, and the Donmar space allowed for a piercing, intense intimacy and immediacy. Although the Vanya production was ever so slightly hobbled by Brian Friels’s uneven “adaptation,” Twelfth Night was everything you could wish for: elegant, hilarious, sexy, sad, utterly magical. A perfect ensemble included a commanding Mark Strong, a captivating Helen McCrory, the peerless David Bradley, and Simon Russell Beale, who created two unforgettable studies of two deeply wounded, deeply lonely men, his Vanya as rumpled and crumpled as his Malvolio was prissy and neat. 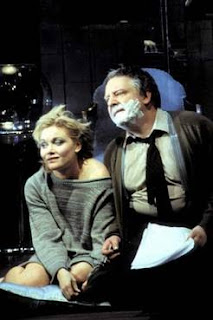 7. Jumpers, National Theatre, 2003
Tom Stoppard’s Jumpers irritated the hell out me at first but I was drawn back to see it a few times and ended up falling in love with David Leveaux’s production, in which there was always something fresh to discover.  Lines that zing and resonate, farce, philosophy, vaudeville, a marriage in crisis, the moon. The immortal question: "Are God?" Leveaux's direction gave the play pace and pizzazz; Simon Russell Beale and Essie Davis's performances gave it heart and soul. 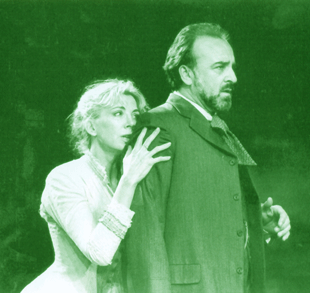 8. The Lady from the Sea, Almeida, 2003
Trevor Nunn’s production exposed the gripping family dynamics underpinning one of Ibsen’s most expressionistic plays without sacrificing any of the oddity and poetry. All of the cast were superb, but the production was dominated by Natasha Richardson’s performance. As Ellida struggled with and confronted, finally, the choice between danger and fantasy represented by the “Stranger” and the compromises of her marriage, Richardson’s vocal and physical resemblance to her mother Vanessa Redgrave added an extra layer of depth and mystery to a performance of both blazing emotional intensity and subtle nuance. What a terrible loss. 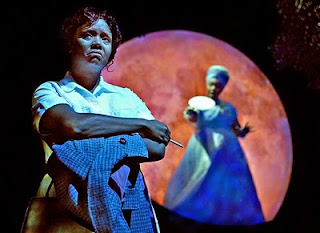 9. Caroline, or Change, Eugene O'Neill Theatre, 2004; NT, 2006
I stumbled into Caroline, or Change on a trip to New York without really knowing much about it at all. I emerged stunned and exhilarated and deeply moved by what I think is far and away the most accomplished, profound piece of musical theatre produced this decade. Tony Kushner and Jeanine Tesori’s soulful, rich and humane people’s opera, about an African-American maid’s relationship with the Jewish boy whose family’s home she cleans, explores big themes - money, race, loneliness, loss - with depth, insight and wit. A gorgeous, stunning score and Tonya Pinkins’s tour de force performance captivated the theatre. I was grateful to have the chance to see it again, in its transfer to the National Theatre in 2006-7. But this is a show that I could happily watch once a week, at least. 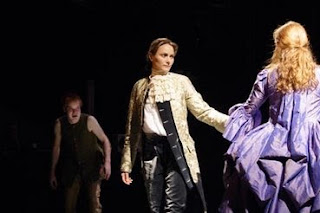 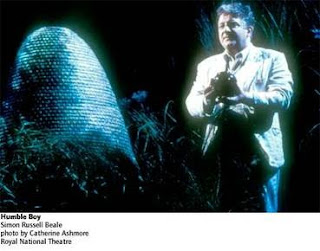