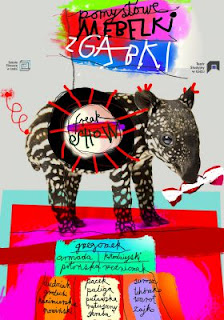 Premiered in November, and already honoured at FIESAD, Morocco's International Drama Schools Festival (where it collected two prizes), Mariusz Grzegorzek's Fever (more opaque Polish title: Pomysłowe Mebelki z Gąbki) now returns to its "home town" to confound, challenge, delight and excite audiences anew. This production is the Diploma Show of the Acting Students at Łódź Film School, and, as such, serves as something of a showcase for the emerging talents of one of Poland's most prestigious and storied institutions. Since the 2018 Diploma Film from the school, Jagoda Szelc's Monument, was one of the best things that I saw on screen last year, and Grzegorzek's production of Jennifer Haley's The Nether was one of the best that I saw on stage, Fever seemed the ideal occasion to make my first visit to Teatr Studyjny, particularly as the performance was subtitled in English (which the theatre plans to make a more regular feature of its productions). 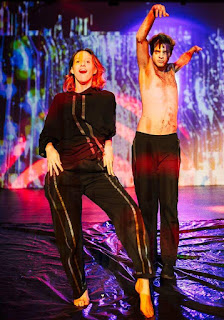 And so it proved. By turns playful and political, serious and silly, raucous and reflective, the 3 hour Fever roars across the stage with dynamic youthful energy from its opening moments. Dance, music, poetry, trash TV and worrying Web 2.0 culture are among the grab bag of modes and cultural references that the show draws from. The kaleidoscopic collage structure of the piece both imitates and subverts the restlessness of Internet surfing or TV channel hopping by mobilising those tendencies for avant garde theatrical purposes. The audience is seduced and challenged by being whisked briskly from one contrasting scenario to the next then surprised with longer sequences that require sustained and immersive engagement. 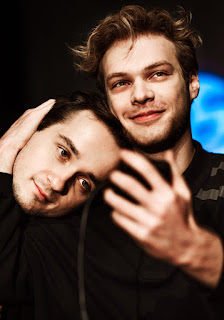 Inevitably some of the scenes and interludes are more successful than others. But the mixing of wildly heterogenous material generates its own cumulative excitement. Fluidity is the name of the game here, with the show leaping from punk (an exhilarating shared scream through Buzzcocks' "Ever Fallen in Love") to classical (David Lang's "The Little Match Girl Passion") to a hilariously filthy take on Disco Polo ("Ass Dance"). 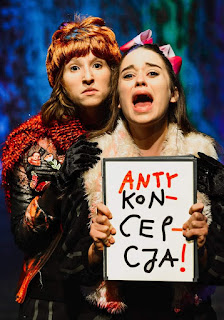 The shifts from wicked parody to heart-wrenching sincerity test the vocal and physical prowess of the multi-tasking cast of 13 - Izabella Dudziak, Mateusz Grodecki, Faustyna Kazimierska, Karol Nowiński, Piotr Pacek, Anna Paliga, Zuzanna Puławska, Robert Ratuszny, Aleksandra Skraba, Michał Surosz, Ksenia Tchórzko, Filip Warot and Elżbieta Zajko - who work together wonderfully well. At times - lined up and striding towards us - they suggest a mob: insolent and looking for trouble. At others - when forming a supportive circle or gently holding on to Tchórzko's hair - they're an empathetic, caring coterie. We're clearly seeing the emergence of some Polish stage and screen stars of the future here. 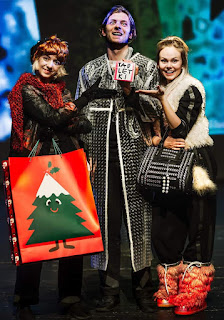 The amount of time given over to the TV reality show parody "Nabrzmiałe Problemy" ("Swollen Problems") - which documents a Łódź teen love triangle - may seem excessive, but the constant switching up of the performers keeps it fresh and funny. Check out, for instance, the brilliantly contrasting ways in which the actors playing the TV announcer approach that role, offering sinister relish (Filip Warot), cool dismissiveness (Robert Ratuszny), sincere interest (Mateusz Grodecki) and self-satisfied camp pose-striking (magnetic Piotr Pacek). Meanwhile, Aleksandra Skraba, Zuzanna Puławska, Izabella Dudziak and Elżbieta Zajko (the latter two also feature in Grzegorzek's Czarownice z Salem) all distinguish themselves with their memorable takes on the show's highly-strung heroine, Sandra. (And be warned: the hilariously inane theme tune of "Swollen Problems" is a definite earworm.) 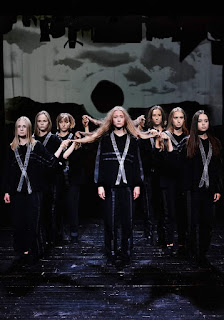 Complementing such sharing of roles, notions of family relationships and community form a thematic throughline, as the show slyly addresses the question posed by Bradley Cooper in A Star is Born's "Shallow" (and quoted early on here): "Tell me something, girl, are you happy in this modern world?" The brashness of the TV show parody is contrasted with sober sections dedicated to Hutsul customs in which attention to community rituals gives the performance a charged collective and historical sense. Some of the most potent moments of the night draw deeply from Polish literary tradition and history, too: witness the rousing choral rendition of the Gall Anonim/Czesław Niemen "Pieśń wojów" ("Warrior Song") or the grotesque and absurdist take on Władysław Bełza's poem "Kłamstwo brudzi" ("Lies Stain"). We're then brought bang up-to-date again with a daring sequence that directly confronts xenophobia and recent political woes. 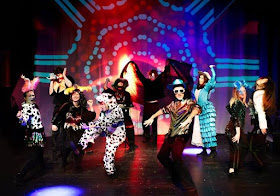 Grzegorzek's visionary directorial signatures are, of course, much in evidence, including projections that range from trippy psychedelia to simple black-and-white beauty (with a twist), while the sensational costume designs of Tomasz Armada (alum of Łódź Academy of Fine Arts and co-founder of the Limanka Fashion House) also ensure that the production is a visual feast as well as an aural one. Fine vocal coaching from Izabela Połońska and highly creative choreography from Mateusz Rzeźniczak further contribute to the dynamism of the event. 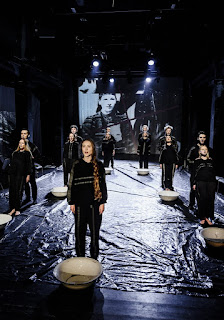 The most breathtaking sequence is saved for last - an expressionist rendering of the bloody, tragic folk ballad "Four Miles From Warsaw," accomplished with bowls of water, towels, a sheet, brilliant accordian-playing from Leszek Kołodziejski - and spine-tingling vocal and physical commitment from the whole cast. It's hard to imagine seeing a more transfixing and imaginative piece of staging this year. Yet that's not everything, after all. Following the intensity of that sequence, a joyful, cleansing coda leaves the audience on a high as it takes us firmly into the liberating territory of Dionysus - by way of Donna Summer. I felt love.