Intriguing, non? You never know what you're going to get from Ozon and, even when they don't quite work, his films are never less than original and exciting.

In the beginning, the end: 2008 Film and Music Best Ofs 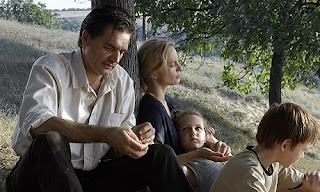 As an inveterate, practically Rob Fleming-esque list maker, it seems appropriate to begin this blog by looking backwards, with a review of the year. So here are the albums and films that inspired me most, and a few of the reasons why. Looking over the film list I’m struck by how few American films I see these days- but also by just how much great, original work is being made - outside of the mainstream, at least. Against all odds, the seventh art’s in good health. It’s a positive thought with which to begin 2009.

Films of the Year


My Winnipeg
Discovering Guy Maddin’s mad, brilliant movies (thanks BFI!) was probably the cultural highlight of the year for me. Maddin's work makes old-movie pleasures new. My Winnipeg might well be his masterpiece, a self-styled “docu-fantasia” that combines the customary exhilarations of his aesthetic with genuine emotional depth. A divine experience.

Of Time And The City
So you wait years for a deeply personal, city-specific documentary from a world-class filmmaker and then two come along at once … Terence Davies’s film clearly invites comparison to Maddin’s as a complex love-hate letter to the city of its auteur’s birth. For me, My Winnipeg is the stronger, more sustained work: unlike Maddin’s, Davies’s voice-over frequently tips into pretension and self-indulgence, while the predictable barbs - at The Beatles, at the Royals - and attempts at socio-political commentary sometimes feel forced. Still, the “Dirty Old Town,” “He Ain’t Heavy, He’s My Brother” and “The Folks Who Live On The Hill” sequences are simply unforgettable and the interplay of images and words often proves an intoxicating mix. It’s one of the (many) indictments of the British film industry that one of our most distinctive directors has had to wait eight years to gain financing for a film, and, even then, under less than ideal circumstances. Here’s hoping that the positive response to Of Time And The City makes finding funding easier for Mr. Davies next time round. http://www.oftimeandthecity.com/

The Banishment
Inexplicably panned on its UK release, by critics too busy praising Mamma Mia!, Andrei Zvyagintsev’s follow-up to The Return proved an equally haunting work. His is a cinema of mood and sensation, reaching deep into the subconscious of the viewer. If you fall under the spell of this movie then you don’t shake it off very easily.

Mamma Mia!
This already feels like a kitsch classic. With only one expressively staged musical number to its name (“Dancing Queen”), an embarrassing and incoherent plot, and Julie Walters and Pierce Brosnan apparently in competition to see who can give the most appalling performance, it’s a flagrant injustice that this became a phenomenon while Across the Universe, Julie Taymor’s far more inventive appropriation of Beatles songs, flopped. That it succeeds, against all odds, is down to a charming performance from Meryl Streep who, really acting her way through the songs, rides the rougher patches with grace.

Summer Hours
A close attention to the intricacies of family dynamics and domestic life is one of the many strengths of contemporary French cinema. In this, perhaps his best film to date, Olivier Assayas anatomises issues of material and maternal inheritance with subtlety and skill and the aid of a brilliant ensemble cast.


La Belle Personne
Drippy Nick Drake songs notwithstanding, Christophe Honore’s charming film satisfyingly completed his unofficial trilogy of Louis Garrell-showcasing New Wave homages. Taking Madame de Lafayette’s novel La Princesse de Clèves as a starting point it’s a more measured and less consistently exhilarating work than either Dans Paris or Les Chansons d’Amour. It’s also, perhaps, a mite less pretentious, though any film which features a scene in which a student dashes from a classroom to hide her emotional distress at a Maria Callas aria clearly aspires to something more profound than Grease or High School Musical. Happily, the talented Honore pulls it off, his camera studying his young actors’ faces with touching, tender candour and his script treating their sentimental travails with warmth as well as wit.
http://www.labellepersonne-lefilm.com/

Alexandra
A war movie like no other, Sokurov’s most accessible film to date strategically placed Galina Vishnevskaya’s indomitable babushka on the frontline of Russia’s Chechen war to offer a singular perspective on conflict and masculinity.


I’ve Loved You So Long
A gripping and moving drama with well drawn characters and a compelling Kristin Scott-Thomas as the ex-con stumbling on the road to redemption and rehabilitation.


Lou Reed’s Berlin
While most American directors seem to have lost either the ability or the inclination to tell an interesting story properly, a few of them have at least succeeded in rehabilitating the concert movie in recent years. Like Jonathan Demme’s Heart of Gold and (to a lesser extent) Liam Lunson’s I’m Your Man Julian Schnabel’s superb recording of Lou Reed’s performance of his 1973 opus combines the exhilarations of film and live music experiences. The visual illustrations of the album’s narrative feel extraneous, as if Schnabel hadn’t quite got over the thrill of filming Emmanuelle Seigner from The Diving Bell and the Butterfly. But, on stage, Reed and co are in electric, utterly commanding form and the dark, pleasingly sordid songs sound better than ever.
http://www.berlinthefilm.com/

Happy-Go-Lucky
Mike Leigh’s latest polarised viewers, with many audiences (particularly British ones) finding Sally Hawkins’s irrepressible Poppy to be less inspiration than irritant. In my book, she comes off as neither, exactly - rather the character represents simply another of the compelling studies in human behaviour in which the director’s cinema excels. A work of subtle depth and considerable charm that skewers contemporary London living as only Leigh can.

The Silence of Lorna
The Dardennes brothers, those great humanists of contemporary cinema, produced another stunning film that tackled the immigration issue from idiosyncratic ethical and existential standpoints. Arta Dobroshi’s Lorna bashing her head against a hospital wall as a calculated means to a new life was somehow one of the most shocking and expressive images of the year. In addition, kudos to the superb Jeremie Renier whose work here, in Private Property and in Summer Hours (three entirely distinct characterisations) confirmed his status as one of the very best young actors around.

Honourable mentions:
There Will Be Blood, Couscous, The Band’s Visit, Lars and the Real Girl, In Memory of Me, Lust, Caution


Albums of the Year


Vampire Weekend by Vampire Weekend
For me, the year’s best album arrived early in the shape of Vampire Weekend’s superb debut. An utterly addictive record from a band who arrived sounding confident, fresh and fully formed. Let’s hope they make good on the brilliant promise of this.

All I Intended To Be by Emmylou Harris
Harris, in gorgeous voice as always, took a back-to-basics approach to her latest album, eschewing the experimental tendencies of her Lanois and Burns-produced work for a more traditional and acoustic sound. The result is a perfect record for Sunday-morning spiritual realignment.

Modern Guilt by Beck
One of Beck’s best, most inviting and consistently engaging albums. Modern Guilt initially feels slight after the epic sprawl of The Information, but what it loses in scope it gains in focus. Each track here is a gem.

Easy Come, Easy Go by Marianne Faithfull
Marianne Faithfull’s 22nd record is her most elaborate project yet, an 18-track double album of covers spanning songs by everyone from Dolly Parton to The Decembrists, Duke Ellington to Black Rebel Motorcycle Club, and featuring guest vocalists including Nick Cave, Rufus Wainwright, Antony (inevitably), and, yes, Keith Richards. Not all of it works - “Somewhere” with Jarvis Cocker is one of the grisliest duets in recent memory - but it’s a fascinating and engrossing collection with some incredible moments.

Honourable Mentions:
Viva La Vida, or Death and All His Friends by Coldplay, Day After Tomorrow by Joan Baez, Liejacker by Thea Gilmore, Oracular Spectacular by MGMT, Made in the Dark by Hot Chip

Generally, I'm a fairly punctual guy. But when it comes to technological-type things involving the Interweb, not so much. I don't download music or movies; I go to shops to buy them, or cinemas to see them. I'm an email junkie but don't do MySpace or Facebook. Hence my relative tardiness in even thinking about setting up a blog, despite having kept a regular journal for nearly fifteen years. But here it is, anyway: thoughts, ideas, opinions on music, film, books, theatre, and, probably, some other stuff as well. The title comes care of Tori Amos. The thoughts, for better or worse, come care of me.
Posted by Alex Ramon at 12/28/2008 08:30:00 am No comments: