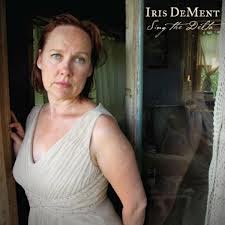 “It’s sure been a while,” drawls the unmistakable, soul-stirring voice of Iris DeMent on “Go Ahead and Go Home,” the brisk, buoyant opening track to her (very) long-awaited new album Sing The Delta. The listener can only nod in agreement at this statement. It’s been, in fact, eight years since DeMent’s last record, the lovely gospel album Lifeline (2004), and a whopping sixteen since the release of her last album of all-original material, 1996’s The Way I Should. Before those releases, DeMent put out two albums - Infamous Angel (1992) and My Life (1994) - that rank as contemporary roots music classics. Deep, powerful, unabashedly personal and emotional works, both records showcased DeMent’s stunningly perceptive song-writing and Arkansas-born, California-bred vocals, a voice whose visceral yet delicate intensity was best described by Folk Roots, for whom her singing “cuts like a knife, takes you apart, then kisses it better.”

Pushier in tone, more controversial in lyrical content yet more commercially-orientated in sound, The Way I Should didn’t really play to DeMent’s strengths, and seemed to send her into a prolonged period of uncertainty about the direction of her art. Depression and writer’s block - and the fact that, as DeMent humbly put it, she simply didn’t feel that she had enough good songs to make an album out of - have therefore significantly curtailed her recorded output, leading to a certain amount of frustration (and sadness) that one of America’s finest artists wasn’t producing more new work.

These long gaps between releases would have turned DeMent into the Kate Bush of Country, were it not for the fact that she’s kept up a pretty consistent touring schedule in the intervening years, maintaining contact with her audience and occasionally debuting new material in concert. Some of those songs now find their way on to Sing the Delta, alongside more recently composed tracks. This rather protracted gestation means that the album can’t boast the complete cohesion of Infamous Angel or My Life and doesn’t quite match either of those masterpieces for sustained impact. Still, it’s a beautiful, heartfelt piece of work, and one that features several songs so good they’ve been worth waiting sixteen years for.

Sonically, Sing The Delta is warm and inviting but never cloying: it expands DeMent’s palette subtly and sympathetically without the jarring flourishes that marred The Way I Should. There’s no fiddle, hardly any harmony parts, a little less twang, more swing and sway. Sparsely employed horns and organ and Bo Ramsey and Richard Bennett’s guitarwork adds texture. Front and centre, though, is DeMent’s simple, elegant, churchy piano-playing which provides intimate, apt accompaniment for her stories of loss, grief, family, home-coming and endurance.

From Infamous Angel’s opening track “Let the Mystery Be” onwards there’s been a kind of stealth subversiveness to DeMent’s best songs, which have often approached classic country subject matter with a gently questioning, questing contemporary spirit. That approach is continued on Sing The Delta. The album’s most overt love song is its title track, an embracing, languid homage to DeMent’s roots that appears to take the form of an address to her step-daughter Pieta Brown and finds the narrator musing on her deep connection to the land that she and her family left so long ago: “it’s the link which my spirit understands.”

Throughout the record, DeMent remains concerned with the role that memory plays in our lives, how we make sense of our past and our losses, and how reminiscence can serve as a source of strength and inspiration. The plaintive yet resolute “Before The Colors Fade” resolves to keep an absent loved one present, through recollection, for as long as it is possible. “If That Ain’t Love” finds strength in the belated recognition of a father’s prayers and the sound of a favourite singer’s voice coming out of the radio. “Mama Was Always Tellin’ Her Truth,” meanwhile, is a bracingly honest addition to DeMent’s catalogue of songs about her parents, recalling with mingled amusement, frustration and admiration her mother’s inability to dissemble. “Right there in that little house there was a bigger world than I may ever see,” DeMent sings, a line that nicely encapsulates the ability of her work to locate the macrocosm in the microcosm and to spin very specific details into songs that connect intimately with the listener’s own experience.

For all their turning away from the less palatable aspects of religious dogma, DeMent’s songs also remain soaked in religious imagery and fully alert both to its uses and its need for subversion. A counter to the “my-real-home-is-in-the-next-world-and-I-can’t-wait-to-get-there” sentiments of a hymn like “I Don’t Want To Get Adjusted To This World” - itself delivered by DeMent with exceptional defiance and spark on Lifeline - “There’s A Whole Lotta Heaven” finds the narrator placing faith in “the love we carry in our souls” rather than in hopes of glory in the afterlife. A more potent expression of the theme comes earlier, though, on the exquisite “The Kingdom Has Already Come,” which opens with DeMent’s narrator seeking solace in a church (“though I don’t even know if I believe in God”), before finding expressions of divinity manifested in the everyday, DeMent’s delivery in the choruses turning the song’s title from tremulous inquiry to ecstatic revelation.

A couple of songs feel under-worked by comparison, notably the anti-introspection ballad “Livin’ On The Inside” and “The Night I Learned How Not to Pray,” both of which would benefit from another verse or two. The latter track seems to me the most problematic song here. While deftly avoiding self-pity as it recounts the narrator’s memory of her brother’s death despite her fervent prayers to God to save him, the perky arrangement seems at odds with the subject matter, even if the shuddering moan that DeMent unleashes at the end saves it.

Indeed, even on some of the less distinguished tracks, DeMent’s vocals remain a source of wonder and fascination, and they seem to have gained some new colours and contours over the years. Hearing her voice, I’m always reminded of the description of a character’s singing in Iris Murdoch’s Under the Net: “she seems to throw the song right into your heart.” DeMent’s singing achieves just that kind of full-on intimacy and immediacy. Her voice can be a sob, a snap, a sigh, a croak, a gurgle; it can sound agelessly old or girlishly fresh. Always it’s filled with pure emotion. Her diction much muddier here than on her earlier albums, her spontaneously slurred, stretched and swallowed syllables succeed in adding a level of mystery to some of these songs, complicating quotidian images. There’s also a new sultriness. “I feel desire,” DeMent sings on “The Kingdom Has Already Come” and damned if the line doesn’t come out sounding like “I feel these arms.”

DeMent’s diction reaches an apex of obscurity on the album’s outstanding closing track “Out of the Fire,” an eight minute emotional epic that builds slowly through memories and associations, its various images - a truck ride with her Grandfather, the aftermath of a revival meeting - gradually achieving clarity through repeated listens, like a blurry film coming into focus. The song pushes DeMent’s writing into a much more abstract zone than ever, but the final image of rebirth and home-coming rings as clear as a bell from the first listen, as DeMent wrests a redemptive flourish out of a moment of absolute emotional desolation. It’s a staggering finale, and one of her finest-ever achievements on record.

For all their scepticism about aspects of conventional belief, then, Sing The Delta’s songs show the listener how to pray: through memories of people and places, through quiet reflection, through careful, loving attention in the here and now. Throughout the record, DeMent seeks - finds - “links which … [our] spirits understand.” It’s absolutely wonderful to have her back.